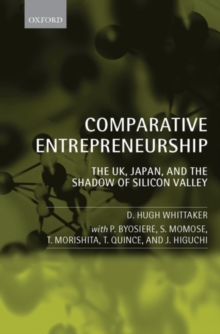 Comparative Entrepreneurship : The UK, Japan, and the Shadow of Silicon Valley Hardback

Similarities are found in approaches to opportunity and business creation, which are strikingly different from recent policy emphases in the UK and Japan, inspired by Silicon Valley (hence the entrepreneurs live in 'the shadow of Silicon Valley'). Differences - in the backgrounds of entrepreneurs, founding teams, attitudes to growth and risk, innovation, competitive advantages, HRM emphases, andinter-firm collaborations - are summed up by the concepts of 'project entrepreneurship' and 'lifework entrepreneurship.' These are closely related to the respective environments, especially the nature of markets in both countries.

This study brings insights from entrepreneurship to comparative institutions and varieties of capitalism, and vice versa, and draws on two surveys and 25 case interviews in both the UK and Japan.

It concludes with a discussion of dilemmas for entrepreneurship policy in the UK, Japan, and other countries.