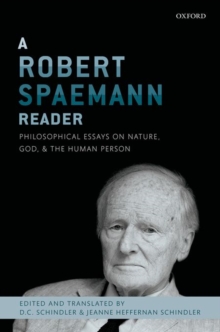 The German philosopher Robert Spaemann is one of the most important living thinkers in Europe today. This volume presents a selection of essays that span his career, from his first published academic essay on the origin of sociology (1953) to his more recent work in anthropology and the philosophy of religion. Spaemann is best known for his work on topical questions in ethics, politics, and education, but the light he casts on these questions derives from his morefundamental studies in metaphysics, the philosophy of nature, anthropology, and the philosophy of religion. At the core of the essays contained in this book is the concept of nature and the notion of the human person. Both are best understood, according to Spaemann, in light of the metaphysics andanthropology found in the classical and Christian tradition, which provides an account of the intelligibility and integrity of things and beings in the world that safeguards their value against the modern threat of reductionism and fragmentation.