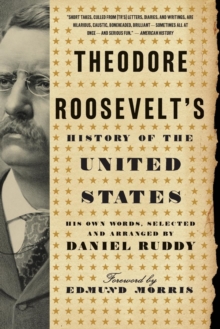 Theodore Roosevelt's History of the United States : His Own Words, Selected and Arranged by Daniel Ruddy Paperback / softback

Theodore Roosevelt's ideas about the nation's past and his own times can be found sprinkled throughout his voluminous writings, but these pearls of thought (as one of his book reviewers described them in 1888) have never before been pulled together in one volume.

Now, through the nimble editing of Daniel Ruddy, "Theodore Roosevelt's History of the United States" provides readers with Roosevelt's unique view of American history from the Revolution to the early twentieth century.

An astute historical observer, Roosevelt was a hanging judge who did not hesitate to render harsh verdicts about leaders and events from America's past.

His razor-sharp opinions cut to the core, capturing the essence of obscure and prominent figures alike: Andrew Jackson was not more than half civilized; John Tyler a politician of monumental littleness; and, William McKinley had no more backbone than a chocolate eclair.

Roosevelt had no hesitation about criticizing his contemporaries, either, especially Woodrow Wilson, who he believed was rotten through and through. What emerges from these pages is, of course, as revealing about Roosevelt as it is about the Unites States; it's a wonderful new angle on both American history and on one of the country's most energetic, brilliant and entertaining men.