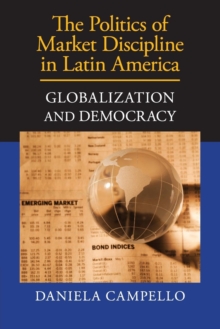 The Politics of Market Discipline in Latin America : Globalization and Democracy Paperback / softback

The Politics of Market Discipline in Latin America uses a multi-method approach to challenge the conventional wisdom that financial markets impose broad and severe constraints over leftist economic policies in emerging market countries.

It shows, rather, that in Latin America, this influence varies markedly among countries and over time, depending on cycles of currency booms and crises exogenous to policy making.

Market discipline is strongest during periods of dollar scarcity, which, in low-savings commodity-exporting countries, occurs when commodity prices are high and international interest rates low.

In periods of dollar abundance, when the opposite happens, the market's capacity to constrain leftist governments is very limited.

Ultimately, Daniela Campello argues that financial integration should force the Left toward the center in economies less subject to these cycles, but not in those most vulnerable to them.