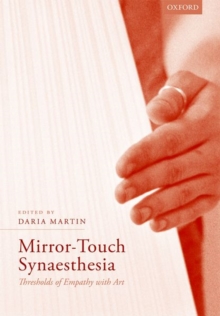 The neurological condition synaesthesia (the mixing of the senses) has for over a century provoked thought about new ways of artistic seeing. In 'Mirror-Touch Synaesthesia: Thresholds of Empathy with Art', a recently discovered manifestation provides a lens through which to re-examine contemporary art experience. People with mirror-touch synaesthesia feel a physical sense of touch on their own bodies when they witness touch to other people and often to objects.

The condition is a rare yet recognizable form of heightened physical empathy: present in just 1 in 75 people, it is associated with an overactivation of the near-universalmirror (neuron) system. Mirror-Touch Synaesthesia places mirror-touch, a social synaesthesia, at the center of dialogue between neuroscience, the humanities, and contemporary art theory and practice in order to explore, for the first time, its powerful potential as a model for the embodied andrelational spectatorship of art.

Mirror-Touch Synaesthesia brings together essays and conversations by prominent neuroscientists, anthropologists, artists, art theorists, curators, film theorists, and philosophers, as well as mirror-touch synaesthetes, and through proximity, and cross-disciplinary dialogue, dissolves barriers not only between disciplines but between theory and experience.

Essays and conversations find common ground not only in quantitative but also qualitative accounts of mirror-touch; the editor has conductedthe first set of in-depth, semi-structured interviews with mirror-touch synaesthetes, which is available in excerpted form in the volume's appendix.

This collection of thirteen conversations constitutes a performative project at the boundary between art and science that invites contributors toreconceptualize the ways that artworks invite us into relational, co-constitutional forms of spectatorship.

Critically refiguring arguments about the 'social turn' in contemporary art that reject the traditional viewer as passive, Mirror-Touch Synaesthesia expands the possibilities of what art we might call 'participatory', and enriches debates around the social agency of perception.

In these essays, the blurred thresholds in mirror-touch between sight and touch, and between self and other,are redrawn for an interdisciplinary readership as newly sensitized boundaries between image and action, art and life.