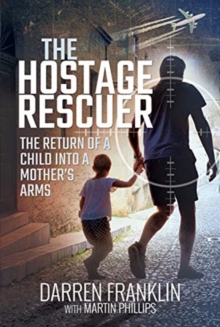 The Hostage Rescuer : The Return of a Child into a Mother's Arms Hardback

This is the thrilling true story of the recovery of an abducted child against the odds.Two close encounters with death convince the author, Darren, that his career in the sometimes murky world of global private security is not the healthiest.

Meanwhile Scottish nurse Diane is on a life-changing route of her own after a Shirley Valentine-style romance on a Greek holiday island.

While she moves to Australia to marry her Greek lover and to start a family, Darren escapes a contract on his life and teams up with a former British special forces operative to get into the business of rescuing abducted children.

Darren's and Diane's paths cross when Diane's marriage breaks down, her ex abducts their four-year-old son Theo back to the Greek islands and, when all attempts to get her son back via the courts have failed, Darren's company is called in to carry out a daring snatch raid.

As Diane waits anxiously in the wings, Darren and his small team must contend with hostile locals, double-crossing police and dubious legal contacts to conduct surveillance on their target, formulate a plan and grab the boy before making their hazardous escape.

They can trust no-one. A whole island community is ranged against them, they have their suspicions about their own lawyer and the charity go-between who completes their team is actively leaking details of their plans, putting the entire mission, and possibly their lives, in danger.

Set against an all-too-real epidemic of parental abductions, and a background of frequent failed recovery attempts, the action swings from Britain to South America to Australia, to the USA and the Greek Islands on a roller-coaster of drama and emotion from start to finish.