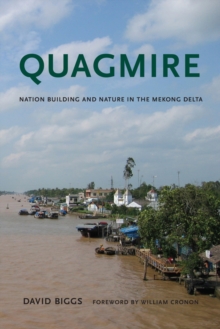 Quagmire : Nation-Building and Nature in the Mekong Delta Paperback / softback

Winner of the 2012 George Perkins Marsh Prize for Best Book in Environmental HistoryIn the twentieth century, the Mekong Delta has emerged as one of Vietnam's most important economic regions.

Its swamps, marshes, creeks, and canals have played a major role in Vietnam's turbulent past, from the struggles of colonialism to the Cold War and the present day.

Quagmire considers these struggles, their antecedents, and their legacies through the lens of environmental history. Beginning with the French conquest in the 1860s, colonial reclamation schemes and pacification efforts centered on the development of a dense network of new canals to open land for agriculture.

These projects helped precipitate economic and environmental crises in the 1930s, and subsequent struggles after 1945 led to the balkanization of the delta into a patchwork of regions controlled by the Viet Minh, paramilitary religious sects, and the struggling Franco-Vietnamese government.

After 1954, new settlements were built with American funds and equipment in a crash program intended to solve continuing economic and environmental problems.

Finally, the American military collapse in Vietnam is revealed as not simply a failure of policy makers but also a failure to understand the historical, political, and environmental complexity of the spaces American troops attempted to occupy and control. By exploring the delta as a quagmire in both natural and political terms, Biggs shows how engineered transformations of the Mekong Delta landscape - channelized rivers, a complex canal system, hydropower development, deforestation - have interacted with equally complex transformations in the geopolitics of the region.

Quagmire delves beyond common stereotypes to present an intricate, rich history that shows how closely political and ecological issues are intertwined in the human interactions with the water environment in the Mekong Delta. Watch the book trailer: http://www.youtube.com/user/UWashingtonPress#p/u/2/gp1-UItZqsk