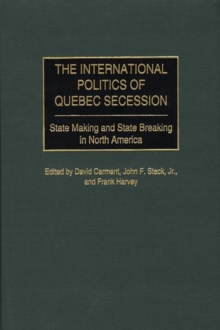 The editors and contributors to this study examine the future of domestic and foreign relations between Canada, Quebec, and their neighbors in the event of a yes vote on independence.

They approach the possible emergence of an independent Quebec nation-state from the perspective of the study of world politics.

As they suggest, this is particularly important because ethnic-based secessionist movements throughout the world now challenge our understanding of the supposed stability of the nation state within geographical regions and even the operation of states within global political and economic systems. They examine the implications of a sovereign Quebec with special reference to ethnic-based secession as a dimension of the emerging post cold war international system.

In this context, the possible devolution of Canada is an event of enormous significance not only for North America, but also Europe, Africa, Asia, and the Middle East.

Given the evolving literature on minorities at risk, ethnicity, ethnonationalism, and ethnic conflict, the prospect of a sovereign Quebec and the devolution of Canada are possible events that may well define the study of world politics well into the 21st century.

This book is an important addition for scholars, researchers, students, and concerned citizens interested in intranational relations and ethnicity and Canadian studies.