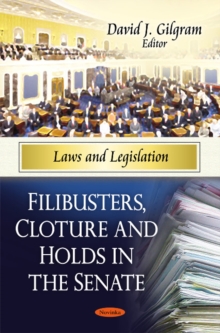 Filibustering includes any use of dilatory or obstructive tactics to block a measure by preventing it from coming to a vote.

The possibility of filibusters exists because Senate rules place few limits on Senator's rights and opportunities in the legislative process.

Senate Rule XXII, however, known as the "cloture rule," enables Senators to end a filibuster on any debatable matter the Senate is considering.

Sixteen Senators initiate this process by presenting a motion to end the debate.

Consequently, "holds" are an informal device unique to the upper body.

They permit a single Senator or any number of Senators to stop, temporarily or permanently, floor consideration of measures or matters that are available to be scheduled by the Senate.