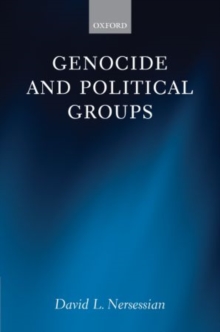 Genocide and Political Groups provides a comprehensive examination of the crime of genocide in connection with political groups.

It offers a detailed empirical study of the current status of political groups under customary international law, as well as a comprehensive theoretical analysis of whether political genocide should be recognized as a separate crime by the international community.

The book discusses whether a stand-alone crime of political genocide should be recognized under international law.

It begins by examining the historical development of genocide and critically assessing the unique requirements of the crime.

It then demonstrates that other international offences -notably crimes against humanity and war crimes- are not workable substitutes for a specific offence that protects political groups.

This is followed by an analytical study of the protection of human groups under international law.

The book proposes a new theory that links the protection of groups to individual rights of a certain character that give rise to the group's existence.

It then applies that theory in evaluating whether political groups are legitimate candidates for specific protection from physical and biological destruction 'as such'.

The writing includes an exhaustive analysis of state practice and opinio juris on the treatment of political groups.

It empirically refutes claims that political groups are protected already from genocide by virtue of post-Convention developments in customary international law.