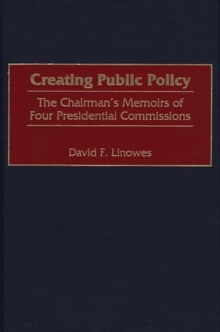 Linowes describes with candor the process designed by private citizens, which culminates in needed legislation. ^L ^L This story is rich in testimony from public and private collectors of personal data who were pressed, under oath, to reveal how they obtain, use, and abuse the information.

Two energy commissions reveal their discovery of the theft of oil on federal and Indian lands by major oil companies.

The second energy panel resolved a major political gridlock by disproving allegations of fraud and dishonesty.

The privatization effort demonstrates the growing need to separate the functions of government and business.

These insights into commission life will be of value to students and scholars of modern American government as well as the interested public.