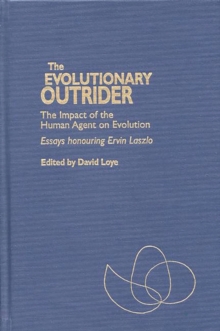 The Evolutionary Outrider : The Impact of the Human Agent on Evolution, Essays Honouring Ervin Laszlo Hardback

The overriding challenge for our species during the 21st century, many believe, will be that of evolving...or becoming extinct.

Can the theory of evolution be expanded into a source of guidance that could help our species save itself?

This collection brings together the thinking of scholars in a wide range of fields in social as well as natural science directed to this end. Moving beyond a critique of neo-Darwinism and sociobiology to explore the action implications of new theory-including Loye's reconstruction of the long ignored full vision of Charles Darwin and Laszlo's new QVI fifth field theory-essays explore the potential for the impact of self-organizing and self-regulating organism, of the biology of love, and the moral directional thrust of the human, as revealed in new discoveries in the fields of biology, psychology, brain research, sociology, economics, history, cultural evolution, and Darwinian re-evaluation.

As such, the collection will be of interest to the educational community, the futurist community, and the more general global foresight community of concerned people.