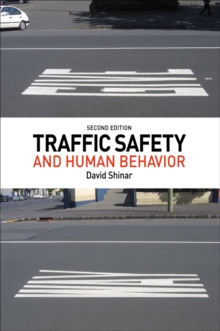 Traffic crashes are one of the ten leading causes of deaths worldwide, and the leading cause of death for young people in the western world - a seemingly necessary evil that accompanies increasing levels of motorization.

In this comprehensive 2nd edition of the classic "Traffic Safety and Human Behavior" Dr David Shinar provides a theoretical framework and a critical evaluation of the most recent research findings to comprehend the complexity of traffic safety and the central role that road users - drivers, motorcyclists, bicyclists, and pedestrians play in it.

In the new edition of approximately 1000 pages with nearly 300 graphs and tables, Shinar covers the key issues that relate human behavior to traffic safety and the impact that cultural, policy, and technological changes have on them.

In particular the new edition covers the increasing roles that pedestrians and cyclists have in the traffic system and the need to accommodate them; the intrusion of infotainment and its role in driver distraction; and the increasing role of crash-prevention and driver assistance systems in changing the driver-vehicle interaction.