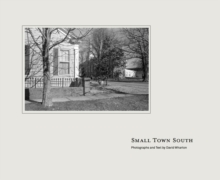 Since 1983 David Wharton has photographed the twelve states that define the American South, focusing his attention on rural and small-town culture, vernacular architecture and landscape, the role of religion in Southern life, and the relationship between Southerners, their natural surroundings, and the communities they have built.

Small Town South is the result of Wharton's travels through a region that extends from Texas, Louisiana, and Arkansas in the west to Virginia and the Carolinas in the east, from Kentucky and Tennessee in the north to Florida in the south, with Mississippi, Alabama, and Georgia forming the region's center in between. No other photographer has devoted so much time and attention to recording this distinctive American place.

The 115 duotone photographs which serve as the book's core, combined with the author's insightful text, convey an overall sense of what the small Southern town has become and looks like during the early twenty-first century.

Wharton organizes his study into thematic portfolios that address themes such as the intersection of tradition and modernity, local commemorations of the past, the omnipresence of the church in town life, the difficulties of making a living in the New World economy, the look of Main Street, the display of public murals and memorials, and the iconographic unfolding of community values. Many have likened Wharton's photographic eye and approach to the work of other photographic masters of the South, including Walker Evans, Eudora Welty, William Christenberry, Shelby Lee Adams, Alex Harris, Rob Amberg, and Martha A.

Strawn. And, just as we turn to those artists to help us understand and reckon with Southern history and culture, we now can look to David Wharton as another pioneer photographer of the Southern small town in all its simplicity and complexity. (See the publisher's website for further information: http://gftbooks.com/books_Wharton.html ).