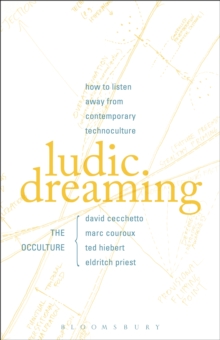 Ludic Dreaming : How to Listen Away from Contemporary Technoculture Paperback / softback

Ludic Dreaming uses (sometimes fictional) dreams as a method for examining sound and contemporary technoculture's esoteric exchanges, refusing both the strictures of visually dominated logic and the celebratory tone that so often characterizes the "sonic turn." Instead, through a series of eight quasi-analytical essays on the condition of listening, the book forwards a robust engagement with sounds (human and nonhuman alike) that leverages particularity in its full, radical singularity: what is a dream, after all, if not an incipient physics that isn't held to the scientific demand for repeatability?

Thus, these studies declare their challenge to the conventions of argumentation and situate themselves at a threshold between theory and fiction, one that encourages reader and writer alike to make lateral connections between otherwise wildly incongruent subjects and states of affairs.