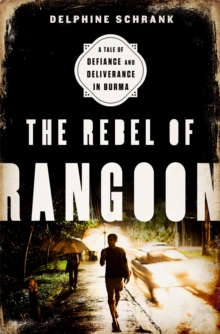 The Rebel of Rangoon : A Tale of Defiance and Deliverance in Burma Hardback

One of Kirkus Reviews Best Books of 2015 An epic, multigenerational story of courage and sacrifice set in a tropical dictatorship, The Rebel of Rangoon captures a gripping moment of possibility in Burma (Myanmar)Once the shining promise of Southeast Asia, Burma in May 2009 ranks among the world's most repressive and impoverished nations.

Its ruling military junta seems to be at the height of its powers.

But despite decades of constant brutality,and with their leader, the Nobel Peace Prize-laureate Aung San Suu Kyi, languishing under house arrest,a shadowy fellowship of oddballs and misfits, young dreamers and wizened elders, bonded by the urge to say no to the system, refuses to relent.

In the byways of Rangoon and through the pathways of Internet cafes, Nway, a maverick daredevil Nigel, his ally and sometime rival and Grandpa, the movement's senior strategist who has just emerged from nineteen years in prison, prepare to fight a battle fifty years in the making.When Burma was still sealed to foreign journalists, Delphine Schrank spent four years underground reporting among dissidents as they struggled to free their country.

From prison cells and safe houses, The Rebel of Rangoon follows the inner life of Nway and his comrades to describe that journey, revealing in the process how a movement of dissidents came into being, how it almost died, and how it pushed its government to crack apart and begin an irreversible process of political reform.

The result is a profoundly human exploration of daring and defiance and the power and meaning of freedom.