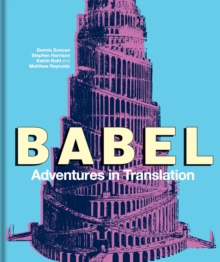 This innovative collection of essays shows how linguistic diversity has inspired people across time and cultures to embark on adventurous journeys through the translation of texts.

It tells the story of how ideas have travelled via the medium of translation into different languages and cultures, focusing on illustrated examples ranging from Greek papyri through illuminated manuscripts and fine early books to fantasy languages (such as J.R.R.

Tolkien's Elvish), the search for a universal language and the challenges of translation in multicultural Britain. Starting with the concept of Babel itself, which illustrates the early cultural prominence of multilingualism, and with an illustration of a Mediterranean language of four millennia ago (Linear A) which still resists deciphering, it goes on to examine how languages have interacted with each other in different contexts. The book also explores the multilingual transmission of key texts in religion, science (the history of Euclid), animal fable (from Aesop in Greek to Beatrix Potter via La Fontaine, with some fascinating Southeast Asian books), fairy-tale, fantasy and translations of the great Greek epics of Homer. It is lavishly illustrated with a diverse range of material, from papyrus fragments found at Oxyrhynchus to Esperanto handbooks to Asterix cartoons, each offering its own particular adventure into translation.