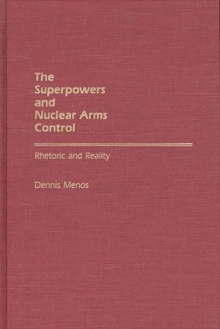 The Superpowers and Nuclear Arms Control : Rhetoric and Reality Hardback

The nuclear arsenals of the United States and the Soviet Union are larger, better equipped, and deadlier than at any other time in history.

This incisive book contends that the superpowers, while exhibiting enormous ingenuity in the area of arms development, have shown only a minimal interest toward the containment of arms.

This is a carefully documented evaluation of the mismanagement of nuclear arms control by the superpowers, and of their failure to contain the nuclear arms race despite their involvement in the process for over a quarter of a century.

Only the superpowers can reduce the proliferation of nuclear arms and in the process lessen the likelihood of nuclear war through accident, miscalculation, or crisis escalation.

The book then considers current threats to arms control evidenced by the termination of the SALT regime and plans to discard the ABM Treaty.

A discussion of the congressional-executive split on numerous key arms control issues is followed by conclusions drawn from observing decades of negotiation.

Comprehensive appendices contain valuable charts and other documents that reinforce the content of the text.

This resource is a useful tool for arms control and disarmament activists, students, and researchers, and for the many men and women everywhere who are at a loss to understand why so little is being accomplished in this critical area.