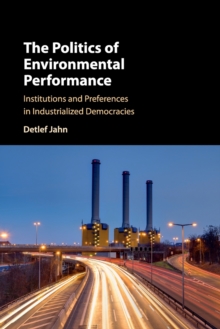 The Politics of Environmental Performance : Institutions and Preferences in Industrialized Democracies Paperback / softback

As the world faces the prospect of climate change, nuclear disasters, and water scarcity, it is clear that environmental degradation is an increasingly serious challenge with economic and social consequences.

In this book, Detlef Jahn analyzes political processes in a macro-comparative study in order to estimate the role of politics in the field of environmental performance in twenty-one OECD countries.

He finds that economic and environmental performance are still closely linked, and that moving towards a service society does not by itself solve the environmental challenge.

The close relationship of these areas was made strikingly clear in the economic crisis of the new millennium.

He argues that economic globalization fosters environmental deterioration, and undermines efforts in domestic politics and international coordination to improve the environmental record.