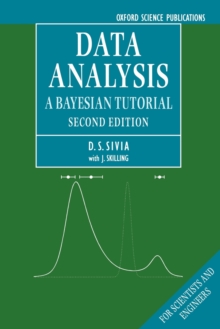 Statistics lectures have been a source of much bewilderment and frustration for generations of students.

This book attempts to remedy the situation by expounding a logical and unified approach to the whole subject of data analysis. This text is intended as a tutorial guide for senior undergraduates and research students in science and engineering.

After explaining the basic principles of Bayesian probability theory, their use is illustrated with a variety of examples ranging from elementary parameter estimation to image processing.

Other topics covered include reliability analysis, multivariate optimization, least-squares and maximum likelihood, error-propagation, hypothesis testing, maximum entropy and experimentaldesign. The Second Edition of this successful tutorial book contains a new chapter on extensions to the ubiquitous least-squares procedure, allowing for the straightforward handling of outliers and unknown correlated noise, and a cutting-edge contribution from John Skilling on a novel numerical technique for Bayesian computation called 'nested sampling'.