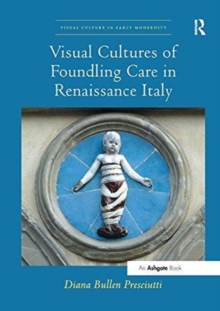 The social problem of infant abandonment captured the public's imagination in Italy during the fifteenth century, a critical period of innovation and development in charitable discourses.

As charity toward foundlings became a political priority, the patrons and supporters of foundling hospitals turned to visual culture to help them make their charitable work understandable to a wide audience.

Focusing on four institutions in central Italy that possess significant surviving visual and archival material, Visual Cultures of Foundling Care in Renaissance Italy examines the discursive processes through which foundling care was identified, conceptualized, and promoted. The first book to consider the visual culture of foundling hospitals in Renaissance Italy, this study looks beyond the textual evidence to demonstrate that the institutional identities of foundling hospitals were articulated by means of a wide variety of visual forms, including book illumination, altarpieces, fresco cycles, institutional insignia, processional standards, prints, and reliquaries.

The author draws on fields as diverse as art history, childhood studies, the history of charity, Renaissance studies, gender studies, sociology, and the history of religion to elucidate the pivotal role played by visual culture in framing and promoting the charitable succor of foundlings. 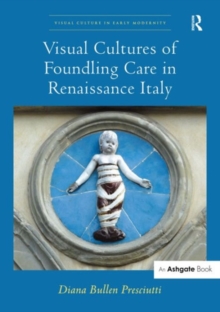 Visual Cultures of Foundling Care in...