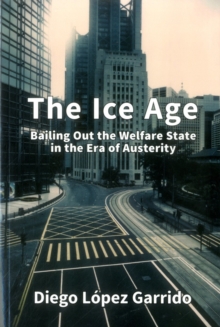 The Ice Age : Bailing Out the Welfare State in the Era of Austerity Paperback / softback

The Great Financial Crisis of 2008 that is still haunting western democracies has not been a mere bump in the road of economic growth.

It has inaugurated a new era, cold and hard like the Ice Age, that brings with it profound changes, especially in the south of Europe - most notably in Greece.

Society has found itself devastated by unemployment and underemployment, by the increase in poverty and inequality, and by a notable increase in xenophobia.

The State has been weakened, and stripped of its power by the enormous fiscal evasions and circumventions of multinational corporations and the power of 'the market'.

Faced with the new panorama, the United States has reacted in a more innovative way than the European Union, which is still torn between failed austerity measures and the loss of social rights, and the proposal to rescue the welfare state with an intelligent Europeanism and solidarity without borders.

This second position is that which is defended by Diego Lopez Garrido in this book, which looks to add to the already intense debate surrounding the new Europe that we need to build following the 2014 European elections.