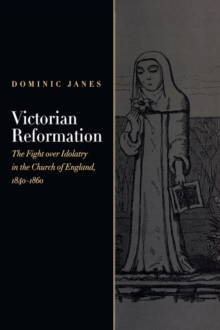 Victorian Reformation : The Fight Over Idolatry in the Church of England, 1840-1860 Hardback

In early Victorian England there was intense interest in understanding the early Church as an inspiration for contemporary sanctity.

This was manifested in a surge in archaeological inquiry and also in the construction of new churches using medieval models.

Some Anglicans began to use a much more complicated form of ritual involving vestments, candles, and incense.

This "Anglo-Catholic" movement was vehemently opposed by evangelicals and dissenters, who saw this asthe vanguard of full-blown "popery." The disputed buildings, objects, and art works were regarded by one side as idolatrous and by the other as sacred and beautiful expressions of devotion. Dominic Janes seeks to understand the fierce passions that were unleashed by the contended practices andartifacts - passions that found expression in litigation, in rowdy demonstrations, and even in physical violence.

During this period, Janes observes, the wider culture was preoccupied with the idea of pollution caused by improper sexuality.

The Anglo-Catholics had formulated a spiritual ethic that linked goodness and beauty.

Their opponents saw this visual worship as dangerously sensual.

In effect, this sacred material culture was seen as a sexual fetish.

The origins of this understanding,Janes shows, lay in radical circles, often in the context of the production of anti-Catholic pornography which titillated with the contemplation of images of licentious priests, nuns, and monks.