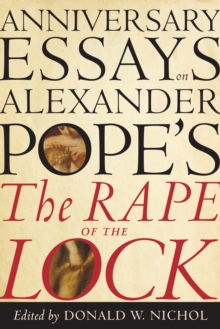 Anniversary Essays on Alexander Pope's 'the Rape of the Lock' Hardback

Alexander Pope's heroi-comical, mock-epic poem, The Rape of the Lock, continues to sparkle after three hundred years as a peerless gem in the canon of English literature.

In celebration of its tercentenary, this collection brings together ten eminent scholars with new perspectives on the poem.

Their approaches reflect the vast range of interpretation of Pope's text, from discussions of religion, gender, and eighteenth-century biological science to an interview with Sophie Gee about her novelization of the poem in The Scandal of the Season.

These stimulating analyses will be essential reading for students and teachers of The Rape of the Lock and a valuable resource for investigating eighteenth-century culture.