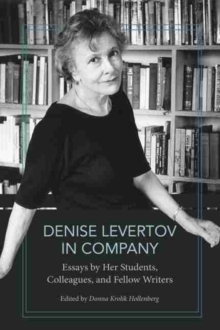 Denise Levertov in Company : Essays by Her Students, Colleagues, and Fellow Writers Hardback

A reflection on this poet's legacy through essays by contemporary poets and literary criticsDenise Levertov (1923-1997) was an award-winning author of more than thirty books of poetry and prose featuring the subjects of politics and war and, in later years, religion.

Born and raised in England amid political unrest and war, Levertov moved to the United States after World War II and became a poet and activist for peace and environmental conservation.

She initially gained recognition as a member of the Black Mountain poets and later as a highly respected mentor and educator at esteemed universities including Massachusetts Institute of Technology, Brandeis, and Stanford, where she helped shape future generations of poets.

In Denise Levertov in Company, Donna Krolik Hollenberg has assembled ten essays by contemporary poets who were influenced by Levertov as former students and/or colleagues and another ten by literary critics. Hollenberg selected contributors on the basis of their spiritual, intellectual, and political connections with Levertov at different stages of her life in the United States, and all are distinguished in their own right.

The first five poets became acquainted with Levertov in the 1960s and 1970s, when they protested together against the war in Vietnam.

The next five poets, who were close to Levertov in the 1980s and 1990s while she was at Stanford, respond to aspects of Levertov's religious quest and her love and concern for the natural world. To assess Levertov's influence on contemporary poetry, Hollenberg has organized the essays into pairs.

First a contributor offers a personal essay about his or her relationship with Levertov, which is followed by a companion essay about the contributor's poetry in relation to Levertov's.

What emerges is a dialogue between autobiographical testimony and critical analysis.

This combination of personal witness and objective evaluation contributes to a greater understanding of the contemporary poetry scene and the influence of Levertov's distinguished and affecting legacy.