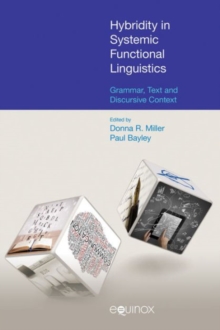 The term 'hybridity' has been around for a long time and, for most of its history of use, has been pressed into the most disparate - and often dubious - services.

In recent times it has become a sort of transdisciplinary 'buzz word' and it was about time that Systemic Functional Linguistics (SFL) also raised its voice on the subject.

This volume addresses the increasingly typical hybrid nature of text and discourse.

In an SFL perspective, this also means that cultural and situational contexts must be seen as being always potentially hybrid or, as Hasan has fittingly put it, 'permeable', such permeability being based on the powerful activation/construal dialectic between discursive situation and language, system and instance.

The authors of the papers in this collection variously focus on hybridity within sociocultural contexts in which discourse occurs, investigate hybridity of discourse types (in a wide range of genres, registers, text-types, etc.), but also examine hybridity within the stratum of lexicogrammar itself.

Moreover, the implications of hybridity for education and the professions are explored.The volume makes plain the multifaceted complexity of the phenomenon, as well as its rich potential as a theoretical construct in SFL