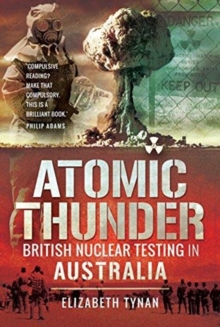 British nuclear testing took place at Maralinga, South Australia, between 1956 and 1963, after Australian Prime Minister Robert Menzies had handed over 3,200 square kilometres of open desert to the British Government, without informing his own people.

The atomic weapons test series wreaked havoc on Indigenous communities and turned the land into a radioactive wasteland.

How did it come to pass that a democracy such as Australia suddenly found itself hosting another country's nuclear programme? And why has it continued to be shrouded in mystery, even decades after the atomic thunder clouds stopped rolling across the South Australian test site?In this meticulously researched and shocking work, journalist and academic Elizabeth Tynan reveals the truth of what really happened at Maralinga and the devastating consequences of what took place there, not to mention the mess that was left behind.