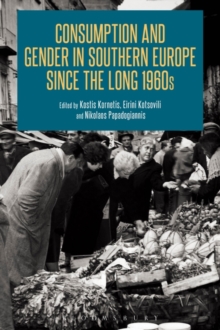 Consumption and Gender in Southern Europe since the Long 1960s offers an in-depth analysis of the relationship between gender and contemporary consumer cultures in post-authoritarian Southern European societies. The book sees a diverse group of international scholars from across the social sciences draw on 14 original case studies to explore the social and cultural changes that have taken place in Spain, Portugal and Greece since the 1960s.

This is the first scholarly attempt to look at the countries' similar political and socioeconomic experiences in the shift from authoritarianism to democracy through the intersecting topics of gender and consumer culture.

This comparative analysis is a timely contribution to the field, providing much needed reflection on the social origins of the contemporary economic crisis that Spain, Portugal and Greece have simultaneously experienced.

Bringing together past and present, the volume elaborates on the interplay between the current crisis and the memory of everyday life activities, with a focus on gender and consumer practices. Consumption and Gender in Southern Europe since the Long 1960s firmly places the Southern European region in a wider European and transatlantic context.

Among the key issues that are critically discussed are 'Americanization', the 'cultural revolution of the Long 1960s' and representations of the 'Model Mrs Consumer' in the three societies. This is an important text for anyone interested in the modern history of Southern Europe or the history of gender and consumer culture in modern Europe more generally.