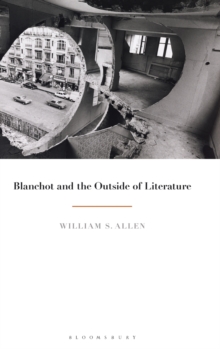 Blanchot and the Outside of Literature Hardback

Maurice Blanchot's writings have played a critical role in the development of 20th-century French thought, but the implicit tension in this role has rarely been addressed directly.

Reading Blanchot involves understanding how literature can have an effect on philosophy, to the extent of putting philosophy itself in question by exposing a different and literary mode of thought.

However, as this mode is to be found most substantially in the peculiar density of his fictional writings, rather than in his theoretical or critical works, the demand on readers to grasp its implications for thought is rendered more difficult.

Blanchot and the Outside of Literature provides a detailed and far-reaching explication of how Blanchot's works changed in the postwar period during which he arrived at this complex and distinctive form of writing.