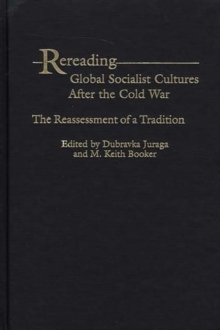 Rereading Global Socialist Cultures After the Cold War : The Reassessment of a Tradition Hardback

During the Cold War, the West typically represented socialism as a threat to genuine aesthetic achievement.

Nonetheless, socialist cultures have produced a rich and varied body of creative works, and socialism continues to be a living force in China and in many regions of the Third World.

The essays in this volume begin to reassess the legacy of socialist cultural production in such areas of the world, which were outside the specific scope of influence of either the United States or the Soviet Union during the Cold War era. The contributors give special attention to the strong anticolonial legacy of socialism and the important role played by socialism in subsequent attempts to build viable postcolonial cultural identities.

Included are chapters on creative works from China, Africa, and the Caribbean, as well as the works of multicultural artists from the United States who stand in relation to Third World cultures.

The essays show that global socialist cultural production was rich and varied during the twentieth century and continues to be so, despite the tribulations experienced by socialism itself.

While some of the chapters address theoretical concerns central to all socialist cultures, the volume focuses primarily on socialist cultures in those parts of the globe that were never fully inside either the Soviet or the American bloc.