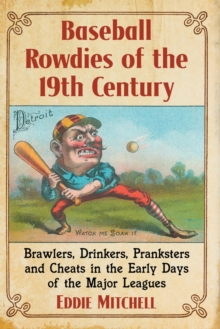 Baseball Rowdies of the 19th Century : Brawlers, Drinkers, Pranksters and Cheats in the Early Days of the Major Leagues Paperback / softback

During the 19th century, baseball was a game with few rules, many rowdy players and just one umpire.

Dirty tricks were simply part of a winning strategy-spiking, body-blocking, cutting bases short or hiding an extra ball to be used when needed were all OK.

Deliberately failing to catch a fly in order to have the game called due to darkness was also acceptable. And drinking before a game was perhaps expected. Providing brief bios of dozens of players, managers, umpires and owners, this book chronicles some of the flamboyant, unruly and occasionally criminal behavior of the baseball's early years.