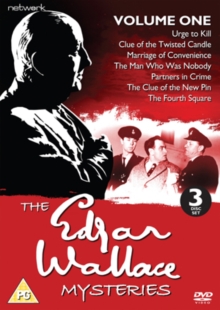 First collection of feature-length TV dramas based on the novels of the British crime writer, Edgar Wallace.

Though most famous today for contributing to the screenplay of 'King Kong' (1933), Wallace was an extremely popular writer of mystery fiction during the early 20th century.

A number of his stories were adapted for TV at Merton Park Studios in the early 1960s and often featured strong casts, with the actors to appear in this volume including Harry H.

Corbett, Bernard Lee and Hazel Court. The episodes are: 'Urge to Kill', 'Clue of the Twisted Candle', 'Marriage of Convenience', 'The Man Who Was Nobody', 'Partners in Crime', 'The Clue of the New Pin', 'The Fourth Square' and 'October Moth'.