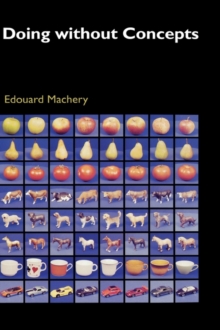 But our empirical knowledge about concepts has yet to be organized in a coherent framework. In Doing without Concepts, Edouard Machery argues that the dominant psychological theories of concepts fail to provide such a framework and that drastic conceptual changes are required to make sense of the research on concepts in psychology and neuropsychology.

Machery shows that the class of concepts divides into several distinct kinds that have little in common with one another and that for this very reason, it is a mistake to attempt to encompass all known phenomena within a singletheory of concepts.

Anyone interested in cognitive science's emerging view of the mind will findMachery's provocative ideas of interest.