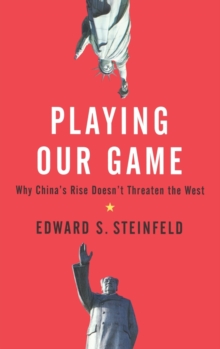 Conventional wisdom holds that China's burgeoning economic power has reduced the United States to little more than a customer and borrower of Beijing.

The rise of China, many feel, necessarily means the decline of the West - the United States in particular. Not so, writes Edward Steinfeld. If anything, China's economic emergence is good for America.

In this fascinating new book, Steinfeld asserts that China's growth is fortifying American commercial supremacy, because (as the title says) China is playing our game.

By seeking to realize its dream of modernization by integrating itself into the Western economic order, China is playing by our rules, reinforcing the dominance of our companies and regulatory institutions.

The impact of the outsideworld has been largely beneficial to China's development, but also enormously disruptive. China has in many ways handed over - outsourced - the remaking of its domestic economy and domestic institutions to foreign companies and foreign rule-making authorities. For Chinese companies now, participationin global production also means obedience to foreign rules. At the same time, even as these companies assemble products for export to the West, the most valuable components for those products come from the West.

America's share of global manufacturing, by value, has actually increased since 1990.

Within China, the R&D centers established by Western companies attract the country's best scientists and engineers, and harness that talent to global, rather than indigenous Chinese, innovationefforts. In many ways, both Chinese and American society are benefiting as a result. That said, the pressures on China are intense. China is modeling its economy on the United States, with vast consequences in a country with a small fraction of America's per-capita income and scarcely any social safetynet.

Walmartization is not something that Asian manufacturing power is doing to us; rather, it is how we are transforming China. From outsourcing to energy, Steinfeld overturns the conventional wisdom in this incisive and richly researched account.