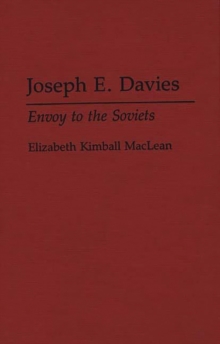 This biography is a complete reassessment of an important American envoy to the Soviet Union in years that were critical in determining postwar East-West relations.

Using formerly untouched primary sources, Dr. MacLean sheds a different light on a controversial figure and on his relationship with world leaders, senior diplomats, and Soviet experts during the period under study.

She offers intimate glimpses into the perceptions and motivations behind major U.S. and Soviet policies from 1936 to 1946. Her fascinating account of this practical idealist is good reading for all interested in diplomatic history and Soviet-American relations. This is a close study of the complex political, philosophical, and personal factors that guided Joseph Davies in his dealings with Roosevelt, Truman, Stalin and Lipvinov, Molotov, Kennan, and Bohlen, to name just a few.

A more balanced interpretation can now be offered of Davies than the traditional two-dimensional stereotype.