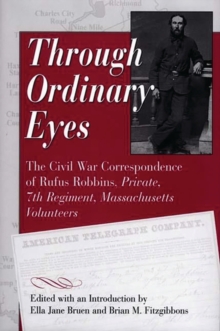 This extensive two-way exchange of letters between Rufus Robbins and members of his family provides a highly personalized view of the life of a Union soldier, as well as life on the home front in South Abington, Massachusetts, an important source of war materiel.

Enlisting in the Seventh Massachusetts Volunteer Infantry Regiment at the seasoned age of 31, Rufus carefully crafts letters that are articulate, graphic, and often witty and that contribute much to our understanding of the daily course of the war.

His brothers detail their involvement in the sewing of army boots, an activity for which South Abington held a large contract. As a confirmed Universalist, Rufus struggled to live a life of faith in the midst of war.

His letters demonstrate the depth of his character, showing both maturity and confidence.

However, as the war continued, one sees his belief in the righteousness of the Union cause, his confidence in God, and his sometimes naive simplicity replaced with a more realistic form of idealism.

In this collection, those interested in military affairs can learn about the economic workings of the camps, the recreational outlets for the soldiers, and the grim realities of the Peninsula Campaign, while scholars focussing on civilian life will gain a greater understanding of the impact of the war on the families and friends left behind.