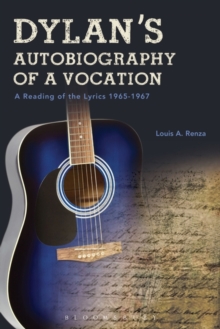 Dylan's Autobiography of a Vocation : A Reading of the Lyrics 1965-1967 Hardback

This book is open access and available on www.bloomsburycollections.com.

It is funded by Knowledge Unlatched. Many critics have interpreted Bob Dylan's lyrics, especially those composed during the middle to late 1960s, in the contexts of their relation to American folk, blues, and rock'n'roll precedents; their discographical details and concert performances; their social, political and cultural relevance; and/or their status for discussion as "poems." Dylan's Autobiography of a Vocation instead focuses on how all of Dylan's 1965-1967 songs manifest traces of his ongoing, internal "autobiography" in which he continually declares and questions his relation to a self-determined existential summons.