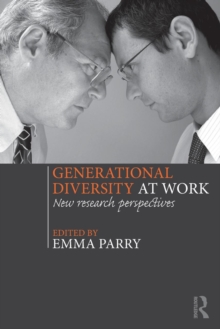 Over the past decade much attention has been paid to the apparent differences in consumption preferences or workplace attitudes and behaviours across generations.

Within Western economies such as the USA, UK and Australia, it is commonly assumed that that there are now four generations in the workplace, namely Veterans (born 1925-1942), Baby Boomers (1943-1960), Generation X (1961-1981) and Generation Y (1982- 2000) The concept of generational differences at work is one that has recently been adopted by practitioners as a basis on which to design human resource management and career management practices.

However, there has been some concern in academic circles about the validity of the notion of generations and the evidence base that supports it.

There is therefore a need for new perspectives and methodological approaches to investigating generational differences at work in order to establish the validity and value of generations as an axis of diversity.

Generational Diversity at Work: New Research Perspectives will address this need by presenting and discussing research into generational diversity that adopts a range of new theoretical perspectives or methodological approaches.

This book is designed as a first step in addressing the need to critically examine the theoretical and empirical basis for generational differences and to provide some new empirical data in this area.