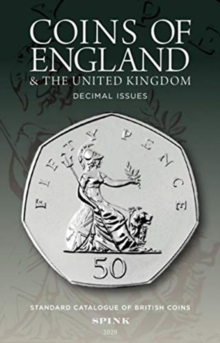 From the earliest of times, coins have been used by states or monarchs to communicate with people; Coins of England is therefore not only a reference book for collectors, but a fascinating snapshot of British history, illuminating its economics, technology, art, politics and religion.

As always, the content has been updated and improved throughout by the editors, with numerous new images and revisions of key sections. For the past few editions the Standard Catalogue of British Coins has separated out the decimal issues under Elizabeth II from the pre-decimal coinages, with all decimal coinage since 1968 listed in a separate volume. The two volumes are available as independent publications for the first time in 2020, this Decimal Issues volume listing all individual coins and sets issued by the Royal Mint from 1971, offering an authoritative catalogue of all modern British coins.