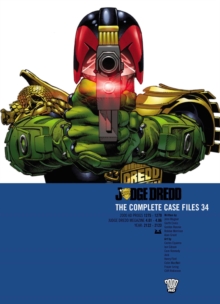 The latest in the smash-hit, best-selling graphic novel series!

Almost half a million copies sold! , WHEN WORLDS COLLIDE! Mega-City One - a nightmarish enclosure located along the Eastern Seaboard of North America.

Toughest of them all is Judge Dredd - he is the law and these are his stories... Former foes with raw grudges pour out of the woodwork when a dimension jump gets hijacked; an assassin carries out executions under the direct orders of the Chief judge; and Dredd's going to need all his years of experience if he's going to teach these punks to stay dead!

Judge Dredd's single-minded pursuit of law comes into conflict with the more clandestine forces of the Hall of Justice, including an assassin under orders of the Chief Judge!,