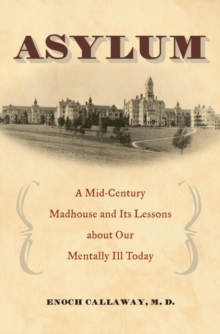 Asylum : A Mid-Century Madhouse and Its Lessons about Our Mentally Ill Today Hardback

Meet Sam, the man troopers brought in because he was standing at the center of the turnpike, directing traffic, claiming to be God's police chief on earth. And Mary, a middle-aged women so obsessed with clean hands she has rubbed her palms raw and bloody.

Then, too, there is Dr. Hudson Hoagland, who uses an ant farm and peppermint oil to illustrate the ancient roots of society's hostility toward schizophrenics.

They are all at Worcester State Hospital, the first state insane asylum established in this nation, and the topic of Dr. Enoch Calloway's fascinating, fast-moving book about this facility that served as a model for others established later in the United States.

Now a respected psychiatrist for more than 50 years, Callaway shows us with compassion and sometimes humor how the now historic mental hospital-where psychiatrists lived with the patients-was unique.

The stories here are more than educational in a traditional sense; they also instruct us on the humanity of the mentally ill-and their physicians. In his witty and warm history of Worcester State Hospital, founded in 1833 as the first state insane asylum established in this nation, Dr. Enoch Callaway reflects not just on the events in this fortress-like place, but also on how those events parallel advances and failures in the field of psychiatry itself.

In addition to patient/psychiatrist vignettes showing treatment techniques of the period-from farm work to early electric shock therapy and insulin treatments that put schizophrenics in a 90-minute coma-Callaway also offers sharp insight into natural treatments that showed remarkable results and unexpected recoveries stimulated by tools as simple as a hand mirror. At times, Worcester may seem brutal, at other times its simplicity seems pure and caring.

There are marvelous successes, and times when the facility seems no more than a warehouse for the mentally ill.

He includes literary works such as Madness in the Streets, Out of the Shadows and I Never Promised You a Rose Garden, as well as cinematic classics like The Snake Pit, One Flew Over the Cuckoo's Nest, and A Beautiful Mind.

Each either reflects or directly opposes procedures, patients, treatments, tribulations, or compassion as they existed at Worcester. Asylums such as Worcester were places that sheltered the mentally ill from harm they might do themselves and others, and from the criminal justice system.

With asylums near extinct now, the mentally ill are again being herded into the criminal justice system where they get little to no mental health care.

Can the successes and failures of a hospital that closed a half-century ago guide us toward something better?

Readers from all walks of life will find this text at once absorbing, disturbing, amusing, painfully serious, and tremendously insightful.