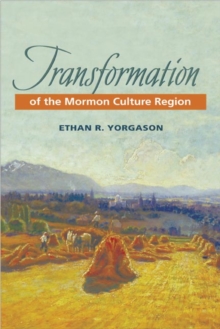 In this unique study, Ethan R. Yorgason examines the Mormon "culture region" of the American West, which in the late nineteenth century was characterized by sexual immorality, communalism, and anti-Americanism but is now marked by social conservatism.

Foregrounding the concept of region, Yorgason traces the conformist-conservative trajectory that arose from intense moral and ideological clashes between Mormons and non-Mormons from 1880 to 1920.

Transformation of the Mormon Culture Region charts how Mormons and non-Mormons resolved their cultural contradictions over time by a progressive narrowing of the range of moral positions on gender (in favor of Victorian gender relations), the economy (in favor of individual economics), and the nation (identifying with national power and might).

Mormons and non-Mormons together constructed a regime of effective coexistence while retaining regional distinctiveness.