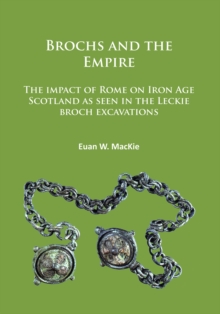 Brochs and the Empire : The impact of Rome on Iron Age Scotland as seen in the Leckie broch excavations Paperback / softback

The excavation of the Leckie Iron Age broch in Stirlingshire, Scotland, took place during the 1970's after the author had been asked to organise the work by a local archaeological society.

At that stage the author did not consider - despite its location - that the site might vividly reflect the expansion of the Roman Empire into southern Scotland in the late first century AD.

For various reasons the final report was not written until about thirty years after the fieldwork finished and by then the quality and significance of the Roman finds was much better understood, thanks to the analysis of them by experts.

Many of them seemed like gifts to the broch chief, despite the clear evidence of the violent destruction of the broch at a later date.

The Roman author Tacitus gave a detailed account of Governor Agricola's campaigns in southern Scotland and pointed out that he sometimes tried to make friends with local chiefs before invading their territories, to avoid un-necessary casualties.

This also applied to the first Roman naval excursion up the west coast and explains the evidence from Dun Ardtreck, Skye, excavated in the 1960's.

This site was also destroyed later and this could reflect the later hostile voyage of the navy after the battle of Mons Graupius which occurred after a few years of campaigning.

Thus Rome's accounts can allow one to understand the history of some native sites much more vividly.