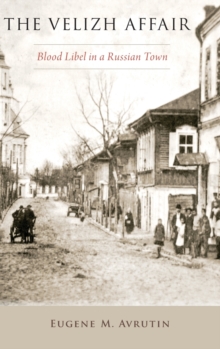 The Velizh Affair : Blood Libel in a Russian Town Hardback

by Eugene M. (Associate Professor of History and Tobor Family Scholar in the Program in Jewish Avrutin

On April 22, 1823, a three-year-old boy named Fedor finished his lunch and went to play outside.

In small market towns, where houses were clustered together, where residents knew each other on intimate terms, and where people gossiped in the taverns, the courtyards, and the streets, even the most trivial bits of news spread likewildfire. And it did not take long before rumors began to spread that Jews had murdered the little boy.

The Velizh Affair reconstructs the lives of Jews and their Christian neighbors caught up in the aftermath of this chilling criminal act.

The inquisitorial commission into the murder resulted in the charging of forty-two Jews with ritual murder, theft, and desecration of Church property, and the forcible conversion of three town residents.

Avrutin explores the multiple factors that not only causedfear and conflict in everyday life, but also the social and cultural worlds of a multiethnic population that had coexisted for hundreds of years.

The case unfolded in a town like any other town in the Russian Empire where lives were closely interwoven, where rivalries and confrontations were part of day-to-day existence, and where the blood libel was part of a well-established belief system.