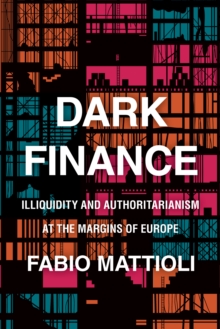 Dark Finance : Illiquidity and Authoritarianism at the Margins of Europe Paperback / softback

Dark Finance offers one of the first ethnographic accounts of financial expansion and its political impacts in Eastern Europe.

Following workers, managers, and investors in the Macedonian construction sector, Fabio Mattioli shows how financialization can empower authoritarian regimes-not by making money accessible to everyone, but by allowing a small group of oligarchs to monopolize access to international credit and promote a cascade of exploitative domestic debt relations.

The landscape of failed deals and unrealizable dreams that is captured in this book portrays finance not as a singular, technical process.

Instead, Mattioli argues that finance is a set of political and economic relations that entangles citizens, Eurocrats, and workers in tense paradoxes.

Mattioli traces the origins of illiquidity in the reorganization of the European project and the postsocialist perversion of socialist financial practices-a dangerous mix that hid the Macedonian regime's weakness behind a facade of urban renewal and, for a decade, made it seem omnipresent and invincible.

Dark Finance chronicles how, one bad deal at a time, Macedonia's authoritarian regime rode a wave of financial expansion that deepened its reach into Macedonian society, only to discover that its domination, like all speculative bubbles, was teetering on the verge of collapse.