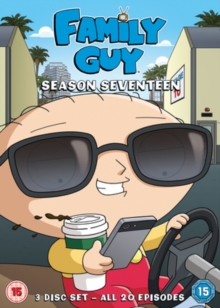 The 17th volume of episodes of the animated sitcom created by Seth MacFarlane.

The dad Peter (voice of MacFarlane) is a big TV fan; mom Lois (Alex Borstein) is a former heiress who gave up her riches to marry the man she loves; 16-year-old Meg (Mila Kunis) is a drama queen eager to be accepted by her peers; 13-year-old Chris (Seth Green) likes his food and has the beginnings of a TV habit which could grow to equal his dad's; baby Stewie (MacFarlane) is a malevolent genius with plans for complete global domination; and martini-guzzling Brian (MacFarlane) is the family dog.

The episodes are: 'The Boys in the Band', 'Bookie of the Year', 'American Gigg-olo', 'Inside Family Guy', 'Chris Has Got a Date, Date, Date, Date, Date', 'Hot Shots', 'High School English', 'Carter and Tricia', 'How the Griffin Stole Christmas', 'Passenger Fatty-Seven', 'Gronkowsbees', 'Peter's Def Jam', 'The Finer Strings', 'The Dating Game', 'Cop and a Half-wit', 'Saturated Fat Guy', 'Peter's Lost Youth', 'The Peter Principal', 'Dearly Deported' and 'A House Full of Peters'.