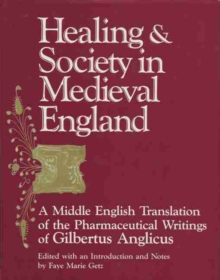 Originally composed in Latin by Gilbertus Anglicus (Gilbert the Englishman), his Compendium of Medicine was a primary text of the medical revolution in thirteenth-century Europe.

In the fifteenth-century it was translated into Middle English to accommodate a widening audience for learning and medical "secrets." Faye Marie Getz provides a critical edition of the Middle English text, with an extensive introduction to the learned, practical, and social components of medieval medicine and a summary of the text in modern English.

Getz also draws on both the Latin and Middle English texts to create an extensive glossary of little-known Middle English pharmaceutical and medical vocabulary.