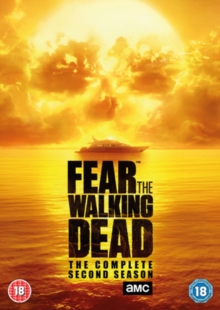 All 15 episodes from the second season of the prequel to 'The Walking Dead'.

Set in Los Angeles, California, the show follows the lives of Madison Clark (Kim Dickens) and her family - boyfriend Travis (Cliff Curtis), her daughter Alicia (Alycia Debnam Carey) and her drug-addicted son Nick (Frank Dillane) - at the beginning of a zombie apocalypse.

When Nick first identifies a zombie after awakening in a drug den not many people believe his stories.

But they are soon forced to after the walking dead begin to overrun the city, prompting the military to be called in to restore order.

In this season, as the military bombs Los Angeles, a boat carrying more survivors is discovered out at sea.