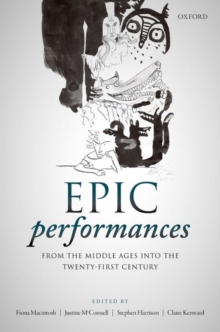 Greek and Roman epic poetry has always provided creative artists in the modern world with a rich storehouse of themes.

Tim Supple and Simon Reade's 1999 stage adaptation of Ted Hughes' Tales from Ovid for the RSC heralded a new lease of life for receptions of the genre, and it now routinely provides raw material for the performance repertoire of both major cultural institutions and emergent, experimental theatre companies.

This volume represents the first systematic attempt to chart the afterlife of epic in modern performance traditions, with chapters covering not only a significant chronological span, but also ranging widely across both place and genre, analysing lyric, film, dance, and opera from Europe to Asia and the Americas.

What emerges most clearly is how anxieties about the ability to write epic in the early modern world, together with the ancient precedent of Greek tragedy's reworking of epic material,explain its migration to the theatre.

This move, though, was not without problems, as epic encountered the barriers imposed by neo-classicists, who sought to restrict serious theatre to a narrowly defined reality that precluded its broad sweeps across time and place.

In many instances in recentyears, the fact that the Homeric epics were composed orally has rendered reinvention not only legitimate, but also deeply appropriate, opening up a range of forms and traditions within which epic themes and structures may be explored.

Drawing on the expertise of specialists from the fields of classical studies, English and comparative literature, modern languages, music, dance, and theatre and performance studies, as well as from practitioners within the creative industries, the volume is ableto offer an unprecedented modern and dynamic study of 'epic' content and form across myriad diverse performance arenas.