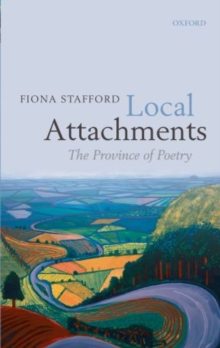 How can poems so firmly attached to particular regions speak to readers far away, who might have no knowledge of the places featuring in the work? Why do writers turn to their own communities for materials? In this thought-provoking and beautifully written book, Fiona Stafford explores the relationship between the local, the national, and the global through the consideration of works by writers whose feeling for place is especially evident. Heaney, Burns,Wordsworth, Scott, Lamb, and Dickens are key figures in the development of a new kind of literature that discovered universal meaning in local truth. Local Attachments begins with Seamus Heaney's Nobel Lecture, 'Crediting Poetry', which is at once a celebration of local work in a global context and a passionate defence of the place of lyric poetry in modern society.

The focus then shifts to the Romantic period, when local detail ceased to be regarded as a sign of limitation and the idea that it is essential to art with any aspiration to permanence became established in British and Irish culture. Stafford explores both the presenceof the local in literary texts by a wide range of writers and the cultural, philosophical and political contexts that might have contributed to this phenomenon. Wordsworth's creative recovery in the Lake District is an exemplary case, illuminating both Heaney's work and that of his immediate contemporariesand heirs.

Since Wordsworth is a foundational figure, the book traces his efforts to achieve a poetry adequate to very difficult contemporary circumstances by returning to his native hills to create work that might live.

His own project drew vital inspiration from the poetry of Burns and also found corroboration in the work Scott, so the book examines their independent explorations of the creative benefits - and problems attending - local attachment.

It also considers the meaning of Burns andWordsworth's local poems for those in very different circumstances - London writers such as Keats, Lamb and Dickens, whose works are considered in some detail in their own right and as representative of the implications of the great Romantic discovery of the local.

The book concludes by addressing thecontinuing appeal of the local in modern, urban society and reaffirms the vital importance of poetry as a response to social crises.